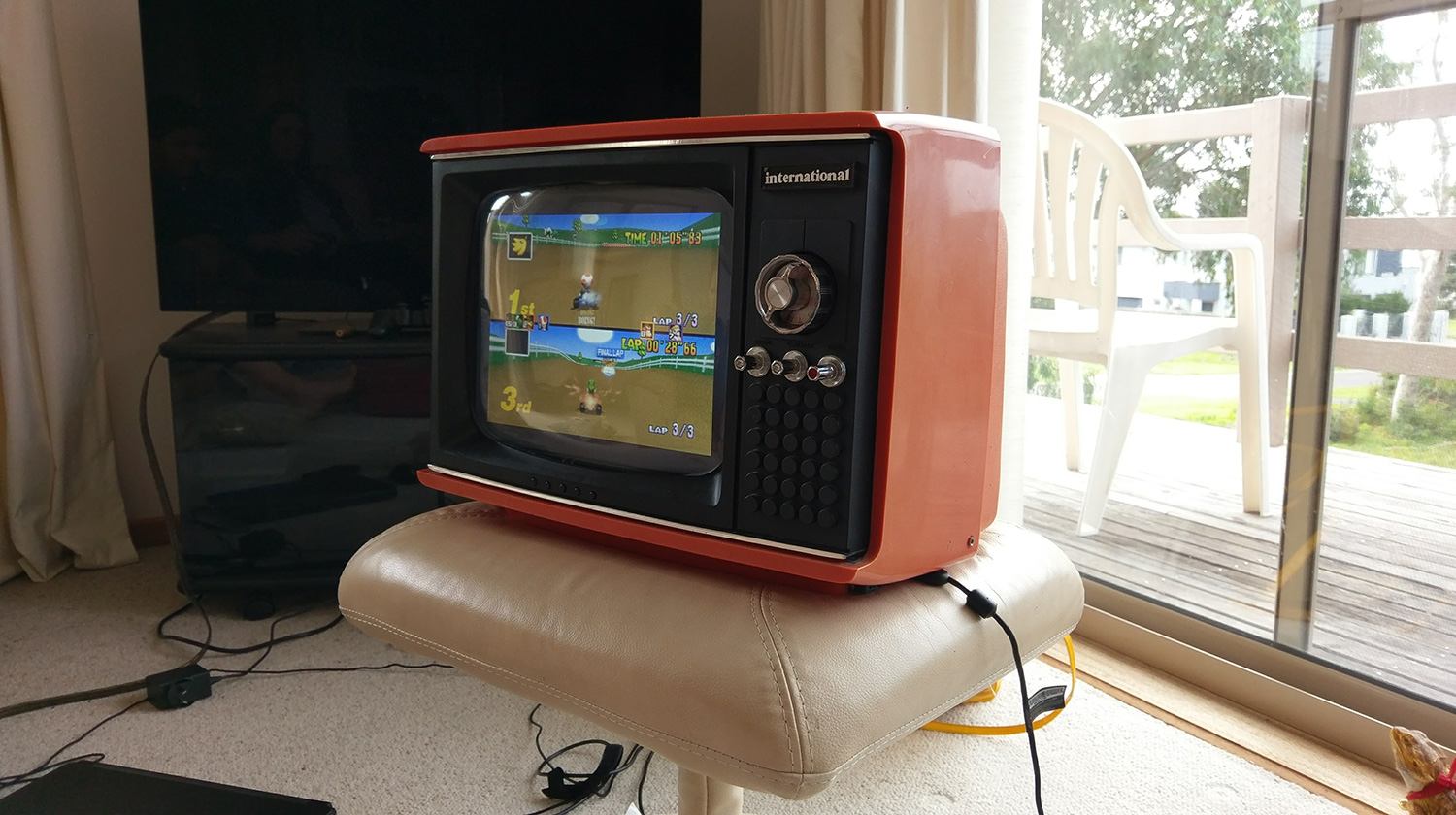 If you love retro gaming then you will freak out at what Finn Anderson did to an old TV.

One day he went dumpster hunting and found this really cool looking old TV, that you’d expect to see in a 70s TV show. It was on the side of a street where someone was having a clear out of their home. Finn saw the potential straightaway and took the TV home with him, knowing full well what he was going to do with it.

He turned it into the coolest retro gaming system. A created a window to the past. All those great retro gaming titles in one small little vintage tv shell. 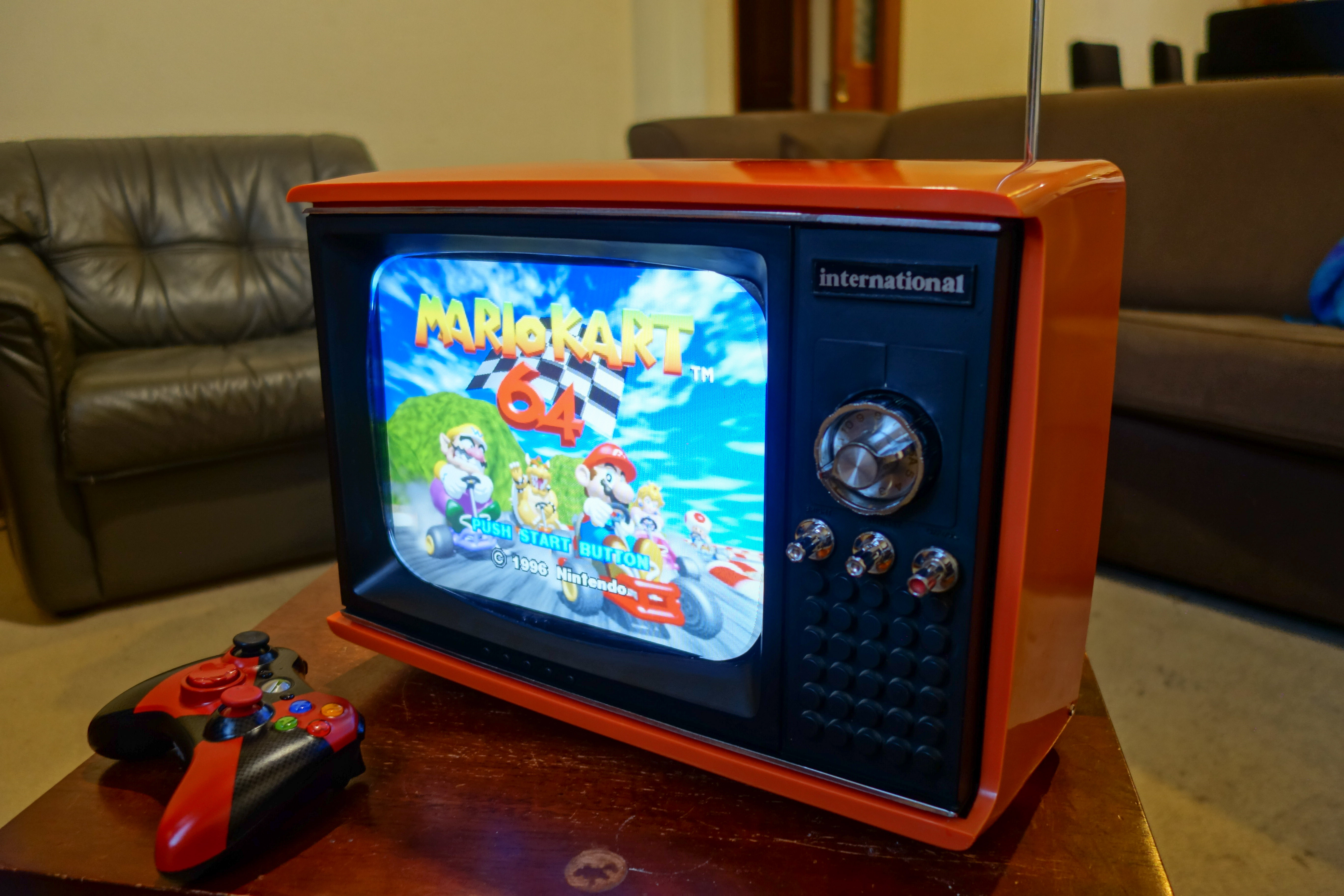 At its core is a Raspberry Pi 3, which runs the great RetroPie image. It can literally emulate the old consoles up to and including N64/PS1/Dreamcast. He managed to incorporate a built-in wireless XBOX controller receiver so you can have epic multiplayer retro gaming sessions with your friends. And when you’ve had enough of gaming in the past, you can switch it’s use to watch actual television with the built in digital tuner. You can do this by using the original knob for channel switching, which is so so sweet!!! 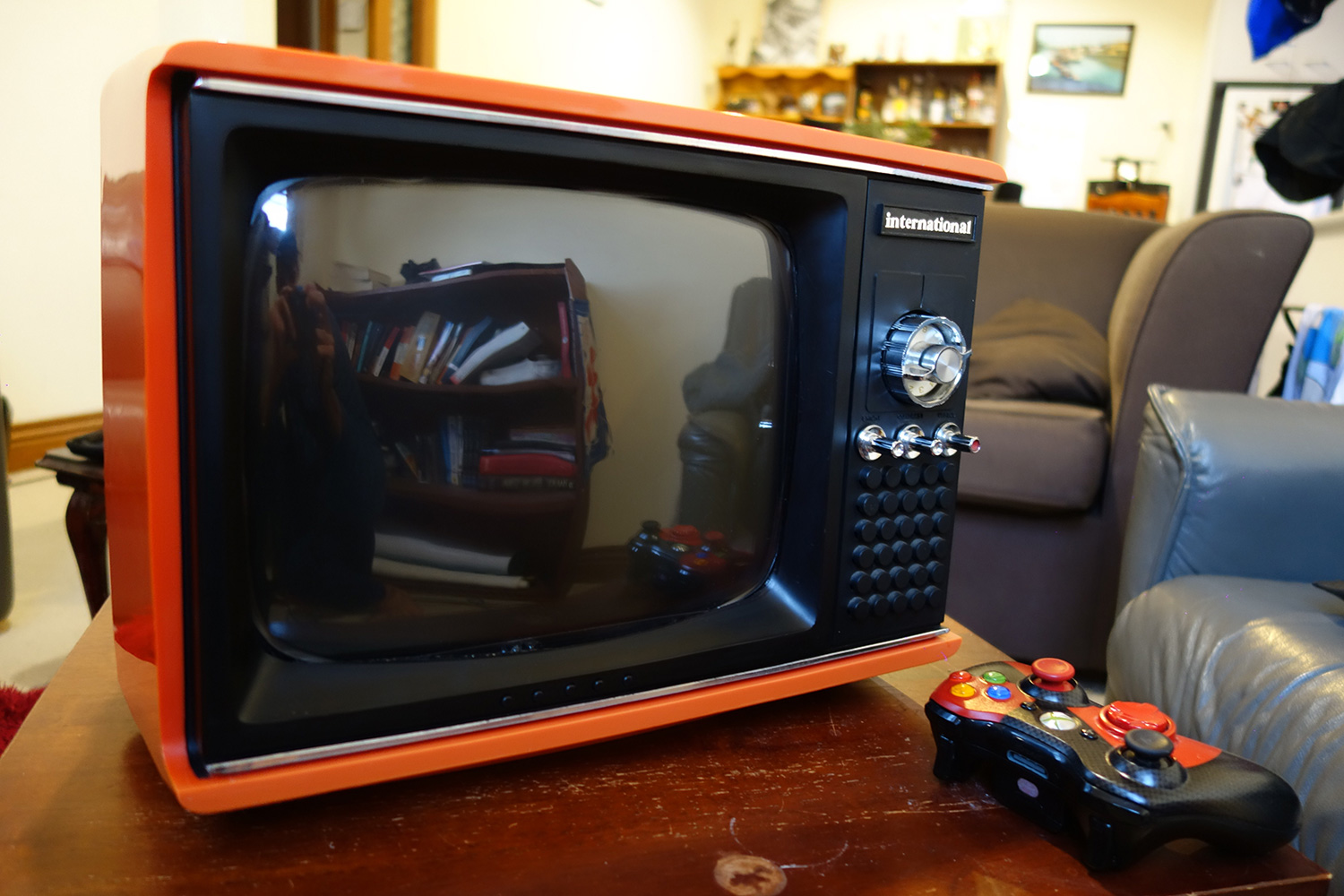 Above is another cool shot of the Retro Gaming TV with it switched off. You can see how beautiful a find this TV was. It looks brand new or like its been time warped from the 70s.

Because of the system running on Raspberry Pi 3, you can emulate loads and loads of games and create awesome menu screens. Below shows the Nintendo 64 game menu, which loads of old titles to choose from. 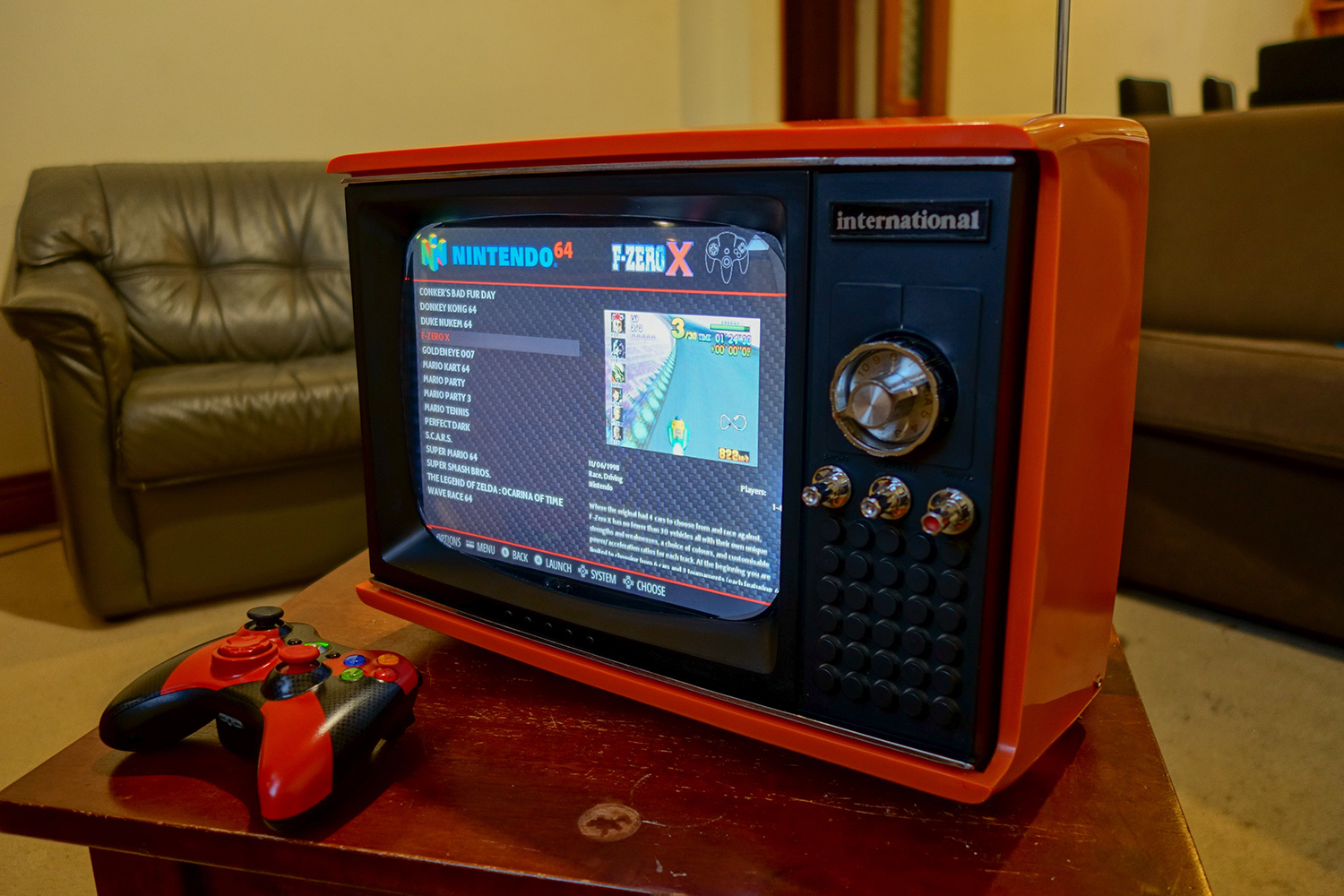 This was what the TV looked like before the magic happened. 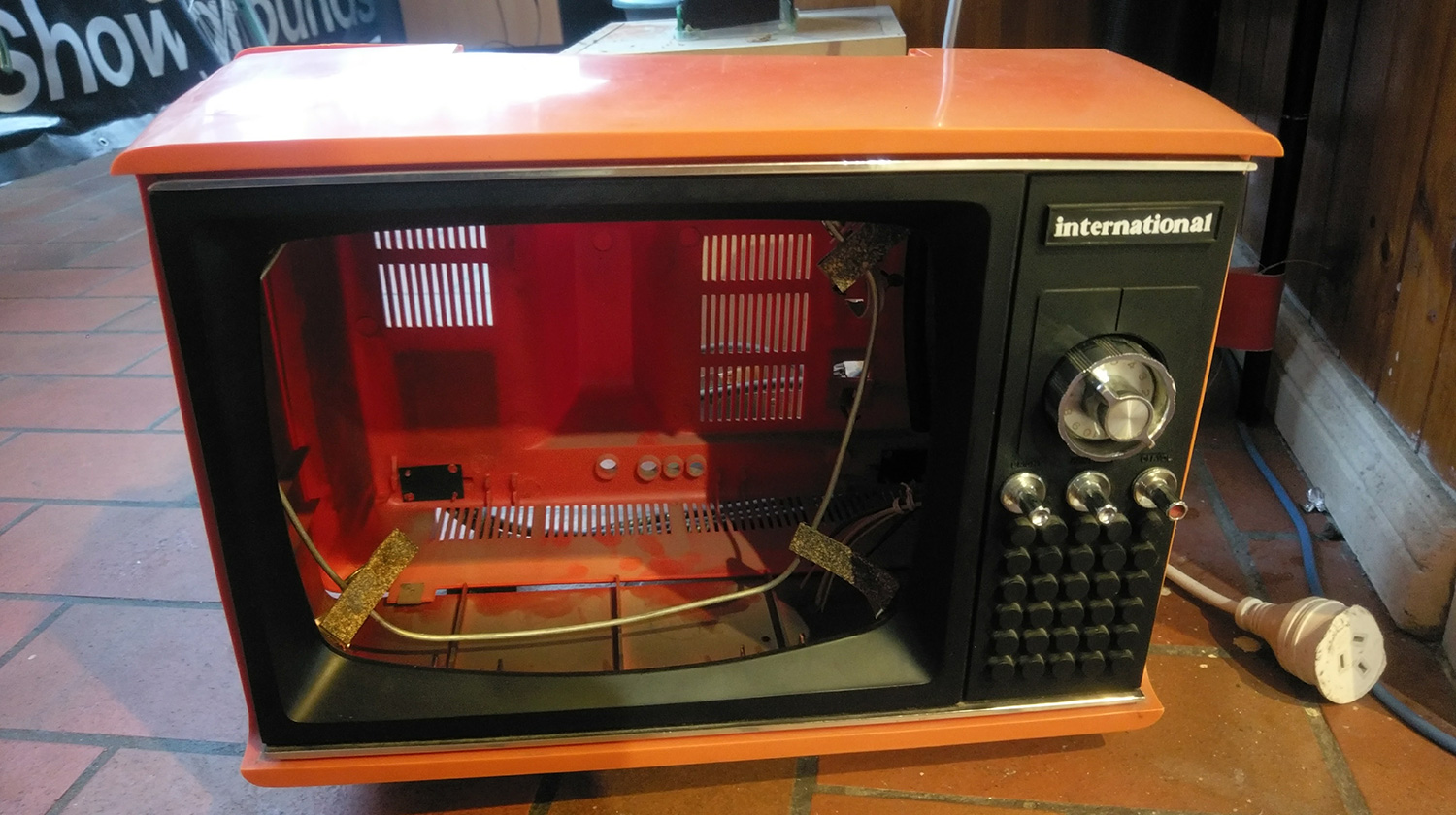 Finn didn’t manage to take any pictures before he started ripping out the old TV system. The original CRT screen couldn’t really work with what Finn wanted to do to it. It could have worked ok, and would have added that extra dimension to the retroness of the gaming tv,  but would have been very difficult to get a video signal to the TV, as it pre-dates that sort of technology. There were no inputs in the TV. All it had was the built-in TV antenna. Finn took out all the old components and decided to use a brand new screen. 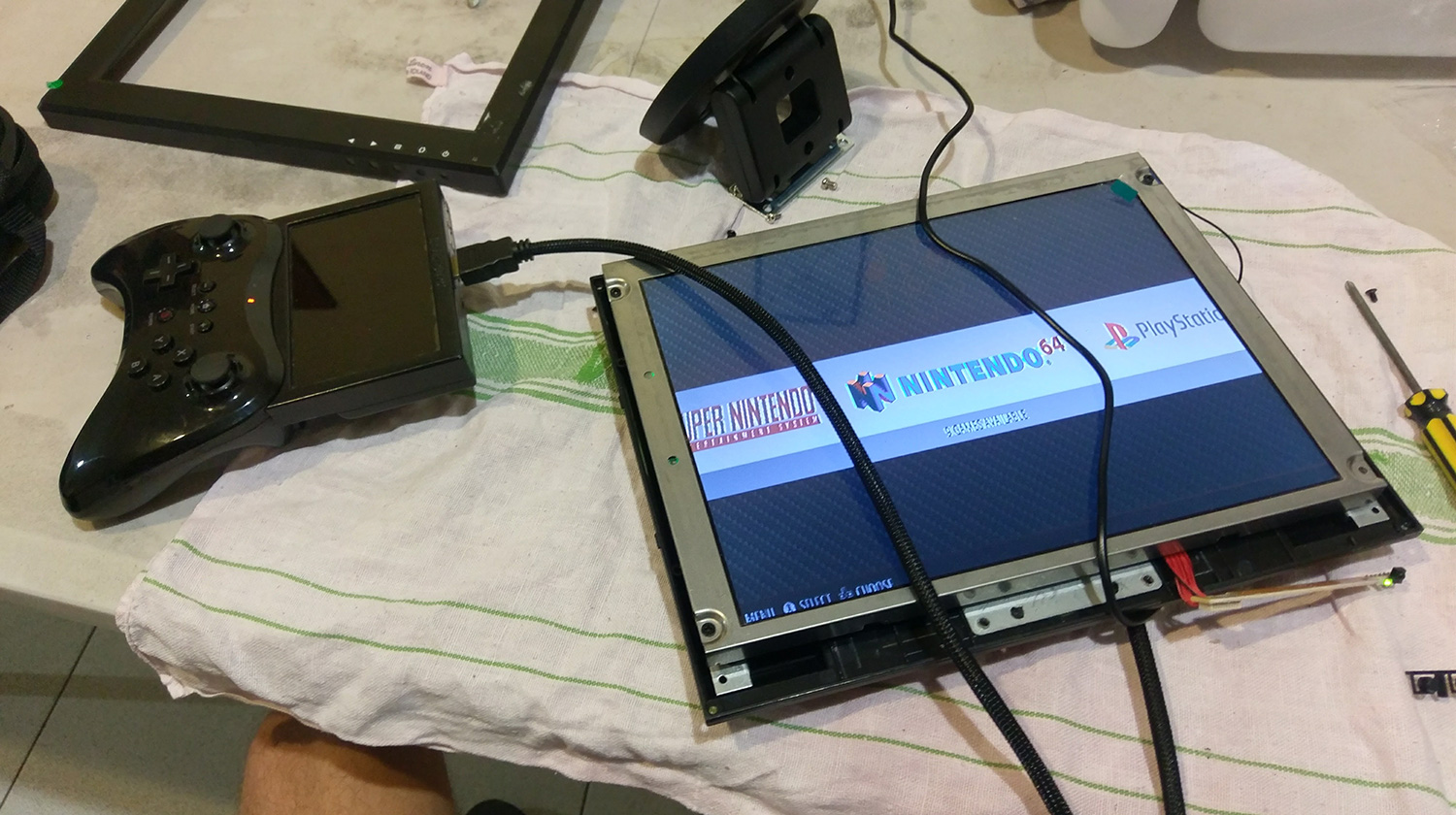 The new screen was purchased on ebay, and provided Finn with the correct technology to create his dream retro gaming system. Above is a photo of him testing out the new purchase. 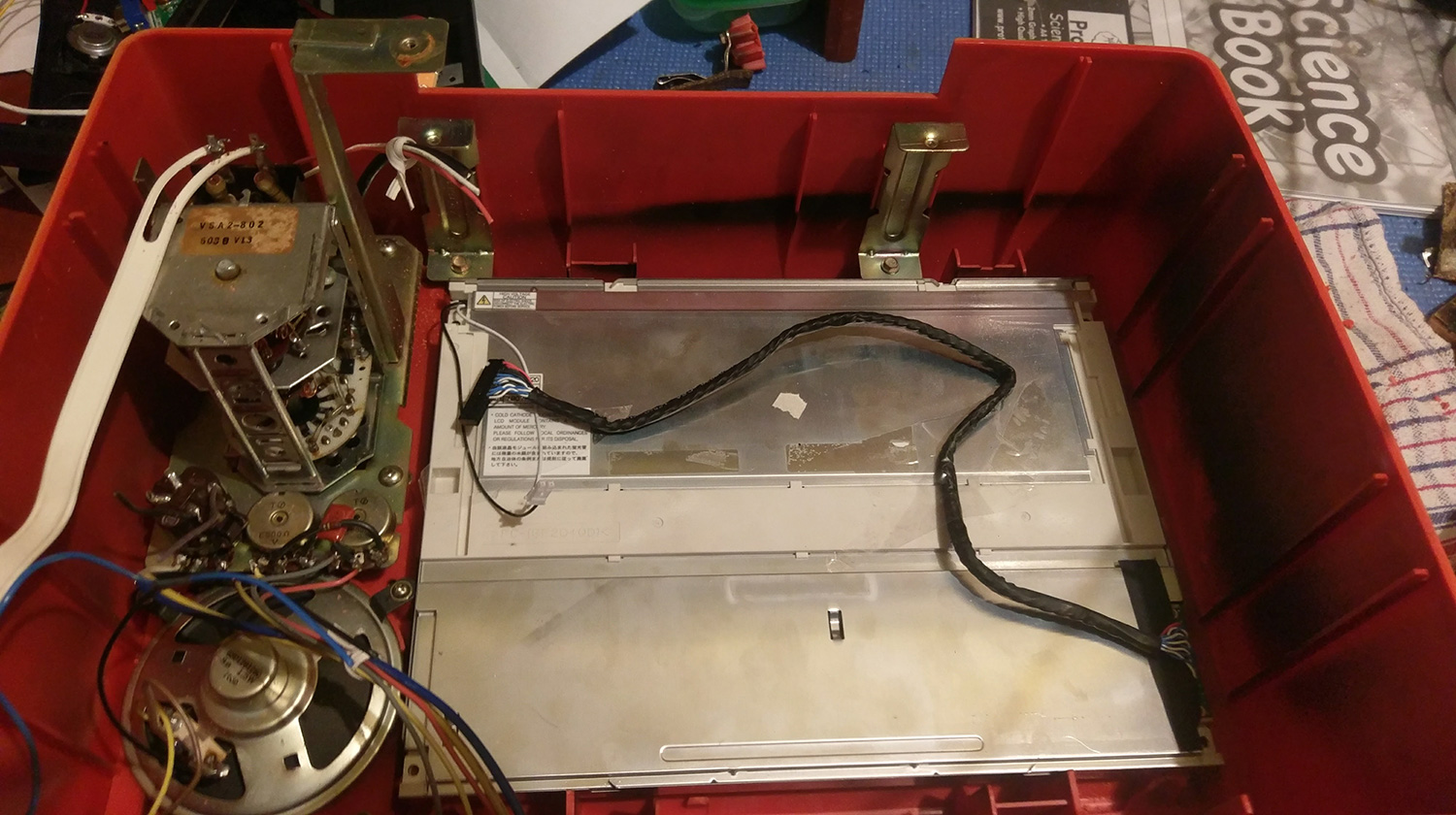 With a bit of cutting, pushing, squeezing and jiggery pokery, Finn managed to get the new screen to fit the TV.

Here’s a cool shot of the inner workings of the retro gaming tv. In the plastic box on the bottom right is the Raspberry Pi and to the left is the digital tv tuner board.

And to make the whole gaming experience even more authentic Finn made a curved shaped screen cover out of some clear acrylic/perspex sheet. This was probably the hardest part of the project as he had to heat the sheet up in the oven and then once it was malleable enough, mould it into the correct shape to fit on the CRT. 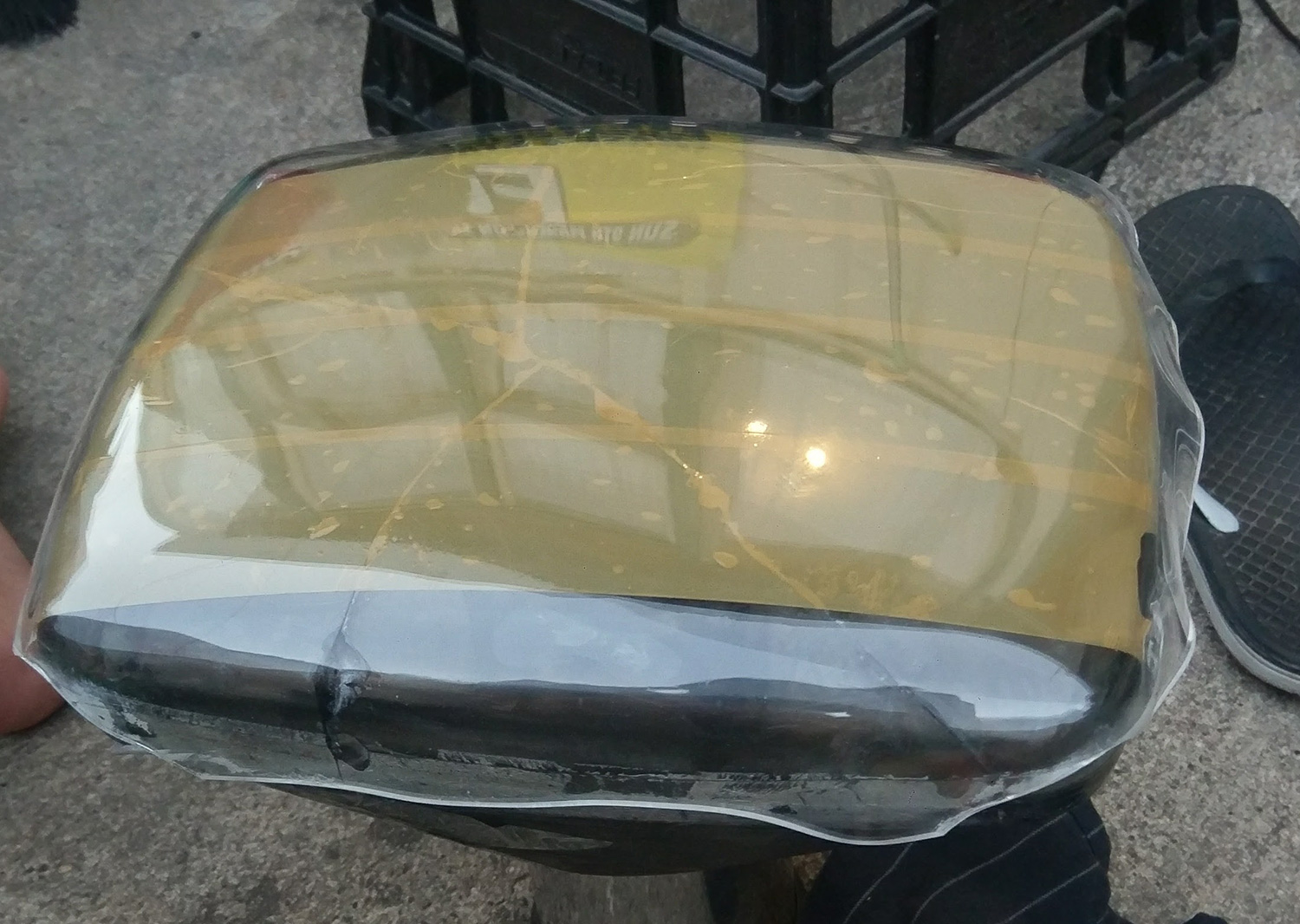 If this TV wasn’t cool enough, Finn decided to install a digital tv tuner so he could watch normal television on the unit. He also made the process of changing the channels retro by having the original channel selection knob functional. Here you can see the 3 big black relays (with transistors to provide enough power to activate them) hooked up to the small tactile switches on the board. 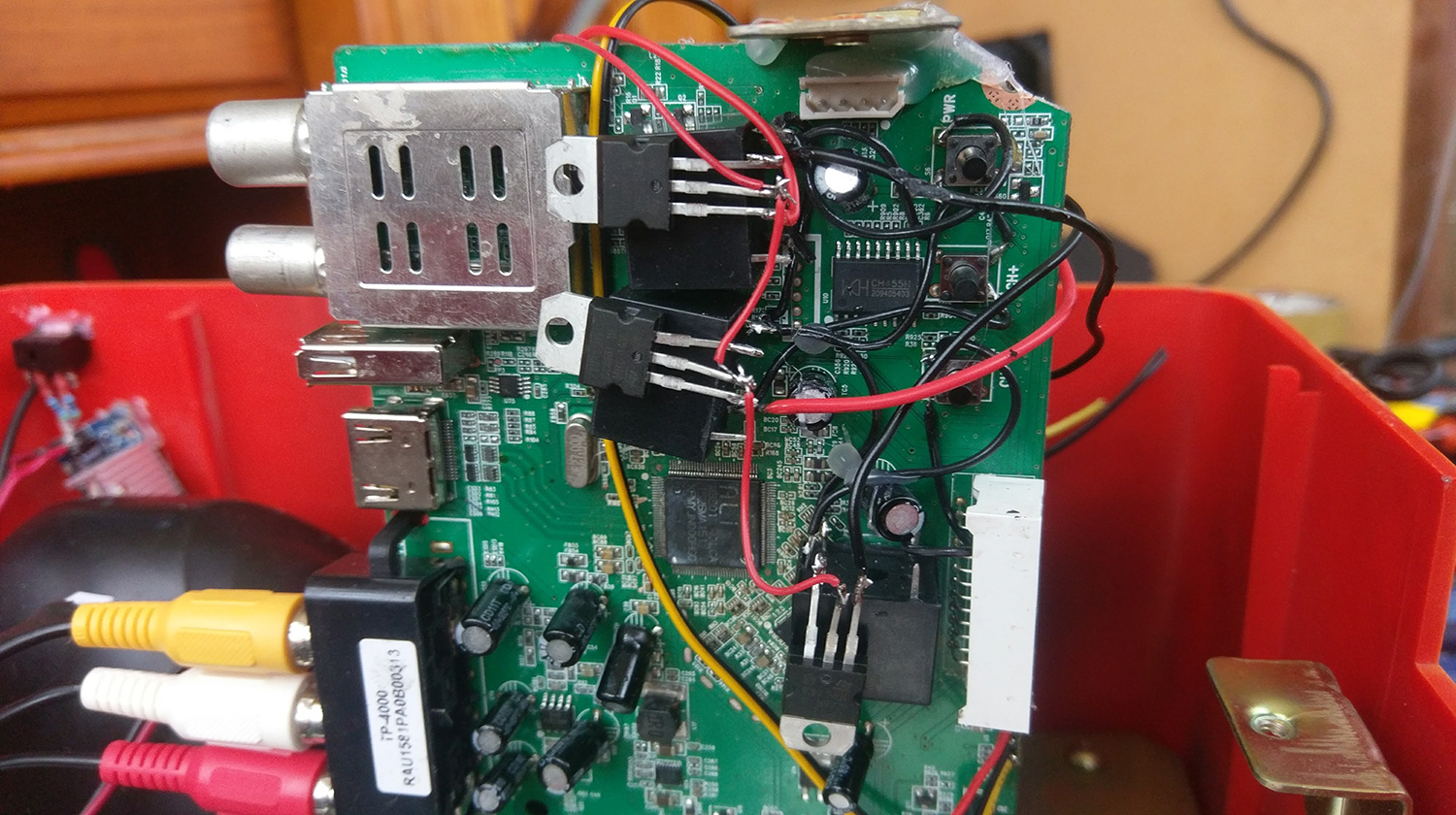 No retro gaming experience is complete without some kick ass speakers. Here’s the new speaker which Finn found in a dumpster. He wired it up to the audio amplifier, also pictured. The original speaker would have been ok 30 years ago, but today we need quality sound to hear our old gaming theme tunes. 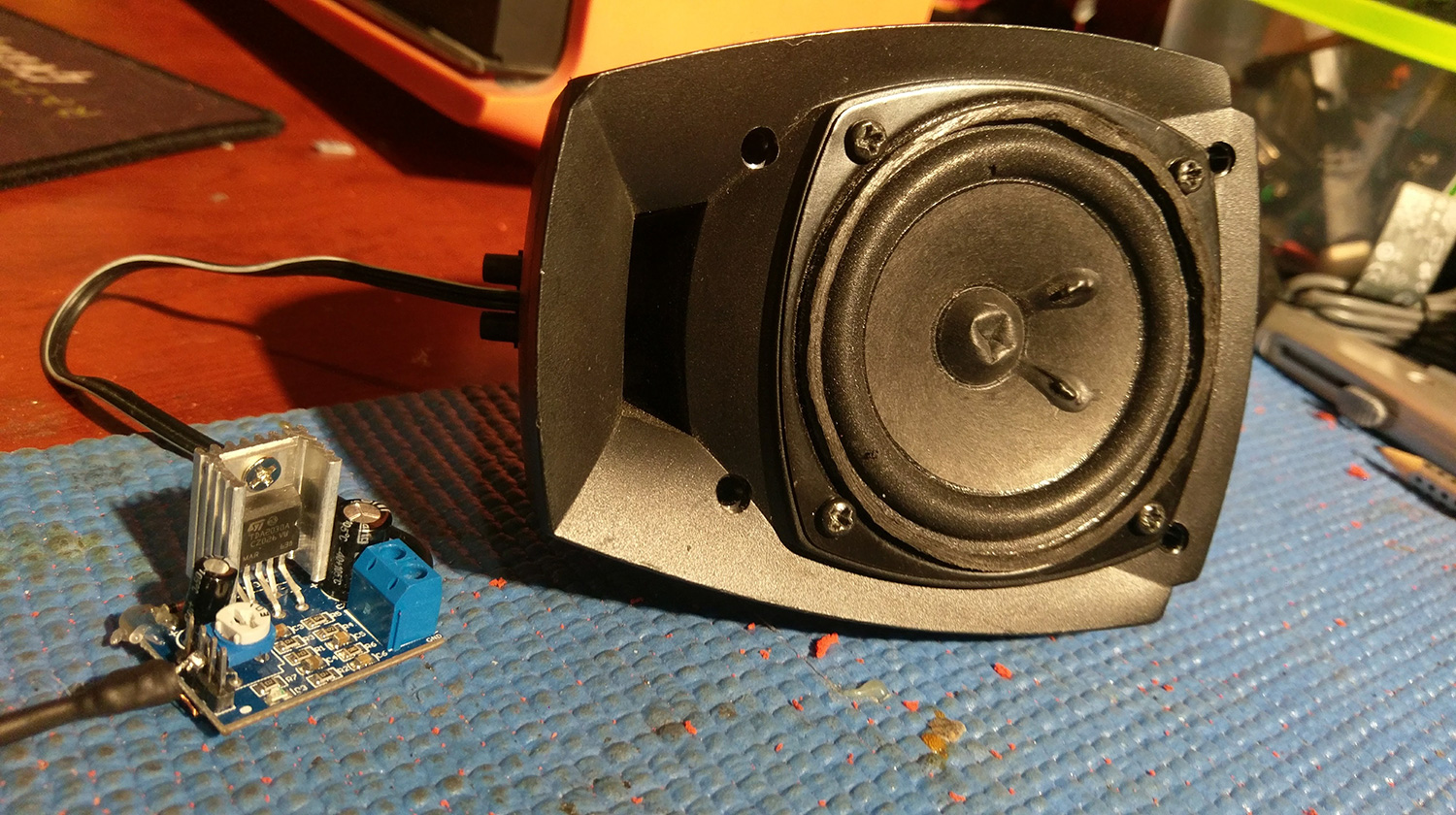 The Finished Inside of The Retro Gaming TV 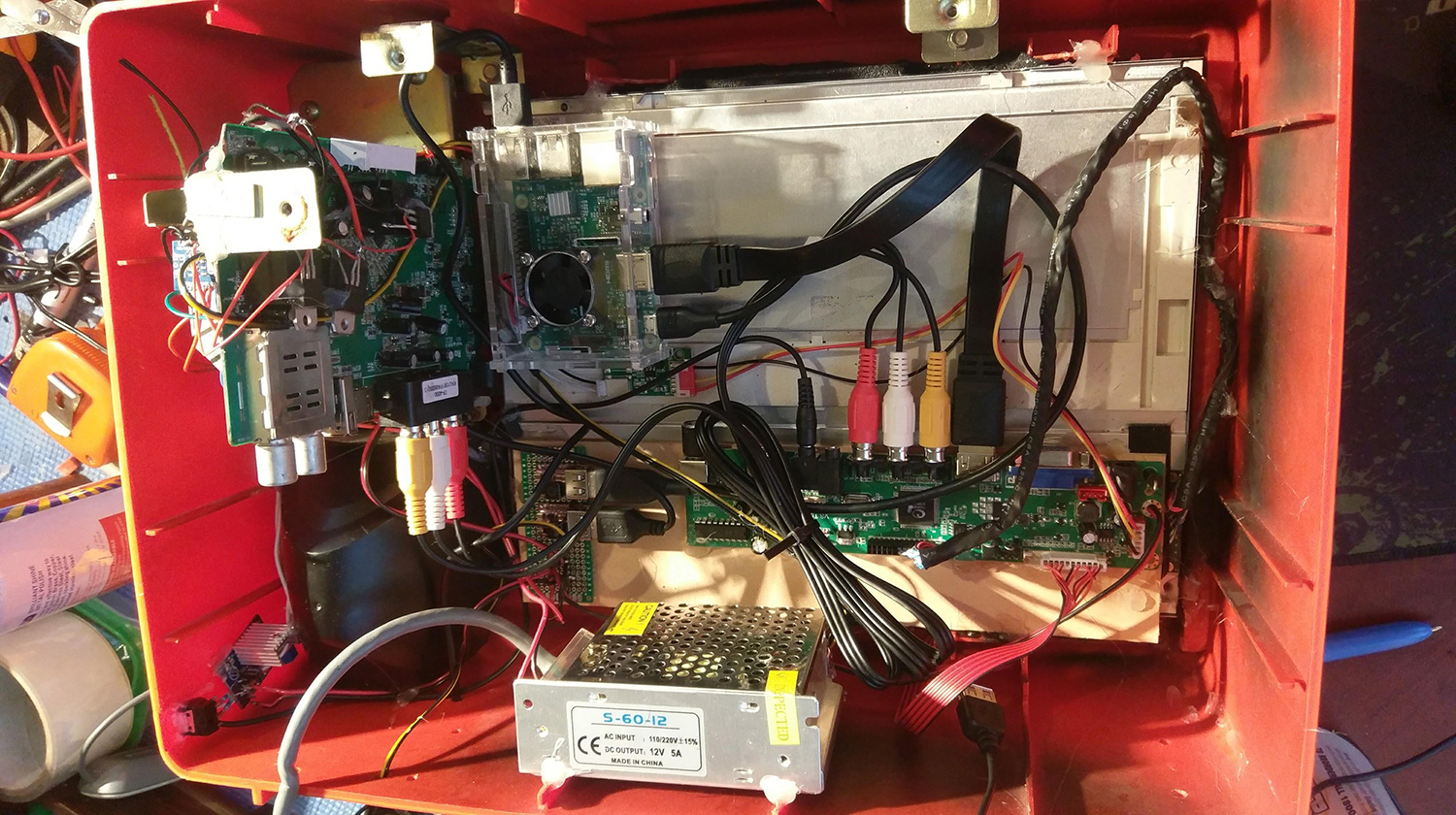 I’ll think you’ll agree that this is a thing of beauty. Taking something that was old and worthless and making it into a retro gamer’s treasure.

This is what it looks like on the inside, all finished and ready to fire up.  At the bottom of the image you can see the power supply. This converts from mains AC to 12V/5A DC.

Directly from the 12V will run the screen, TV tuner and amplifier. Finn also added a power distribution board with 2 step-down converters to 5V to power the Raspberry Pi, USB hub and Arduino.

A fan has been installed to The Raspberry Pi and automatically switches on when the CPU gets hot. This is also connected to the screen through HDMI and the TV tuner through composite video.

Hats off to Finn for making this awesome gaming tv. May you have many years of retro gaming joy. This will no doubt become a family treasure to be handed down to the next generation.

Don’t miss out on our other gaming related guides!

ConsumerExpert.org has some really useful gaming buying guides on a wide range of gaming products. Here a few just for you!