A lot of people don’t want to spend money on a standby generator, but they still want access to backup electricity to power their home. A portable generator solves this problem, and it can supply enough power to keep your appliances and gadgets running.

When a power outage occurs, you need electricity to run vital appliances. If you don’t have it, you could end up with hundreds of dollars in spoiled food, and you won’t be able to live your life normally.

The best portable generator can feed electricity to your lights, power tools, gadgets and appliances, and it can even be used for camping. Generators can run on liquid propane or gasoline, and you can use a manual transfer switch to connect to your home’s master electrical system.

Although many of these products look difficult to use, they’re designed for simplicity, and once they’re filled with a fuel source, they’re perfect for power outages or camping.

What to Look For When Buying A Portable Generator

When shopping for a portable generator, you should know what to look for, and there are several features to be aware of. A generator can provide safe power for sensitive electronics, and for better portability, it might come with convenient handles.

Before you decide on a specific product, you should understand the difference between power ratings. All generators are rated for a certain wattage, which is the amount of power they can provide continuously. The surge or maximum power rating is the highest wattage the generator can reach, but it’s not designed to maintain this wattage.

Since generators run on gas, they produce carbon monoxide, and they also get extremely hot. The best portable generators have built-in safety features, which can reduce the risk of fire and serious injury. Some products also use special covers to prevent unnecessary burns.

Portable generators are designed to provide a specific amount of power, and if your appliances require more electricity than your generator can produce, you’ll run into problems. You should be able to research your major appliances and find out their peak power rating, which is the amount of electricity needed when the appliance is first turned on.

Many homeowners make the mistake of purchasing a generator that doesn’t produce enough power to handle their major appliances, and when they try to use several appliances at the same time, the generator malfunctions.

All generators are powered by a fuel source, and since they’re designed to produce electricity, they must extract energy from gasoline or natural gas.

Many modern generators are powered by gasoline, but you’ll find some models that can run on gasoline or natural gas. In most areas, these fuel sources are readily available, but if you plan to use your generator in remote locations, then make sure it can run on whatever fuel source you’ll have access to. 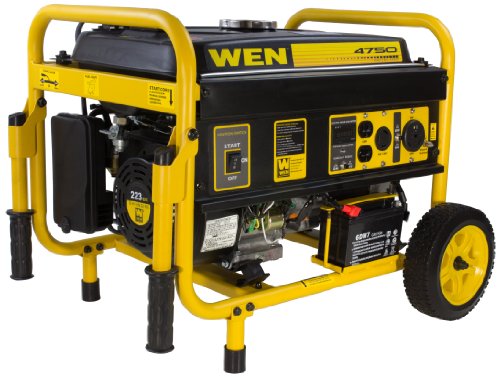 The WEN 56475 is a popular product, and with a 223cc engine, it delivers 4,750 watts of power. The half-load run time for this generator is 11 hours, and the fuel tank can hold up to four gallons.

This product is suitable for job sites, and it can also be used at home. For easier transport, it features a small, compact design, and it comes with two 120v receptacles.

The WEN 56475 can be fired up with a convenient keyless start, and the OHV engine can deliver 3,750 watts of continuous power. To prevent damage to the engine, this generator can detect when the oil level is too low, and if it detects low oil, it will automatically shut down. 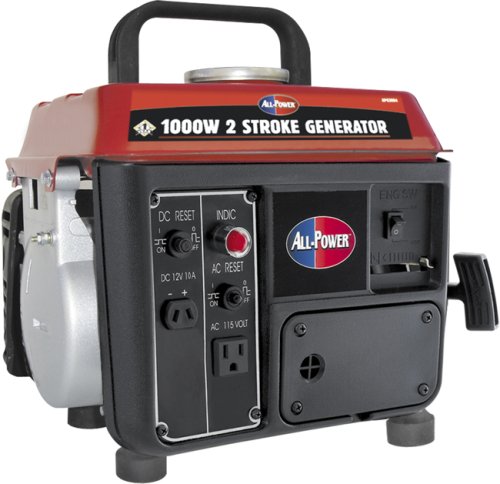 The All Power America APG3004 is powered by gas, and if you’re looking for something to power small tools or appliances, this product might be worth considering.

Since it’s designed to produce minimal noise, it’s a popular choice for camping, but it only produces 850 watts of continuous power. The All Power America APG3004 is classified as an ultra-light generator, which makes it best for emergency use.

To prevent engine damage, it will automatically turn off when it detects low oil, and the engine produces 2.4 horsepower. With a surge rating of 1,000 watts, this generator might not be the best choice as a backup power source for your home.

The Westinghouse WGen7500 can produce 7,500 watts of continuous power, and it’s rated for 9,500 watts of peak power. It’s also CARB compliant and powered by gas.

With a 420cc engine, it can run for 14 hours at 50 percent load, and the large fuel tank can hold six gallons. This generator features several 120V outlets, and it’s designed to be easy to use.

The Westinghouse WGen7500 is recommended for household projects, but it’s also commonly used for power outages, tailgating events and camping. A one-touch electric start fires up the engine, and strong roll bars are built into the frame to protect the gas tank. 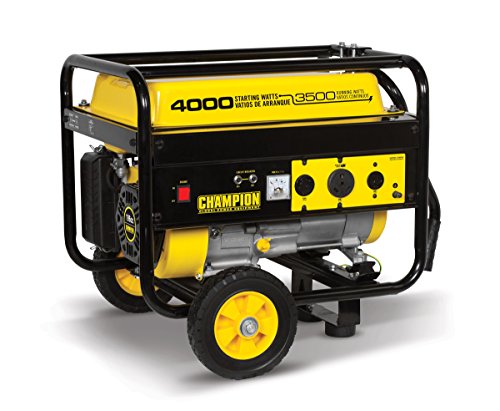 The Champion Power Equipment 46597 is equipped with a standard 30A RV outlet, which makes it a popular choice for RV owners.

With 4,000 starting watts, it produces enough power to start a 15,000 BTU air conditioner, and once it’s running, it delivers 3,500 watts of continuous power. A full tank of gas will allow this generator to run for 12 hours, and the 196cc engine is optimized for cold starts.

For convenience, this portable generator is equipped with several different types of outlets, and to protect sensitive electronics, it comes with a built-in Volt Guard. If you’re looking for something to use during emergencies or power outages, this generator might be worth considering.

When it comes to engines, Honda is a well-known brand, and the Honda EU2000I is designed to be extremely quiet. This product is equipped with a recoil starting system, and the noise level for maximum power is rated at 59dB.

The maximum power rating for this generator is 2,000 watts, but it only produces 1,600 watts of continuous power. With a full tank of gas, it can run for 3.4 hours, and to protect delicate electronics, it has a built-in inverter.

The Honda EU2000I is commonly used for jobsites, camping and household appliances, and at maximum power, it produces less noise than a conversation. 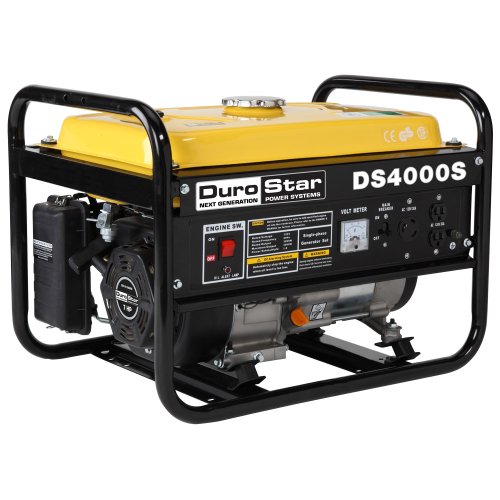 The DuroStar DS4000S generator features an OHV engine, and the 7.0-horsepower engine is air cooled and produces 3,300 watts of continuous power.

At peak power, this generator is capable of 4,000 watts, and the gas tank can hold four gallons. A full tank of gas is good for eight hours of continuous operation, and the protective frame is made from heavy-duty steel. Isolated motor mounts allow the engine to run smoothly and quietly.

Like many other portable generators, this product comes with built-in safety features, and if it detects low oil, it will automatically turn off. 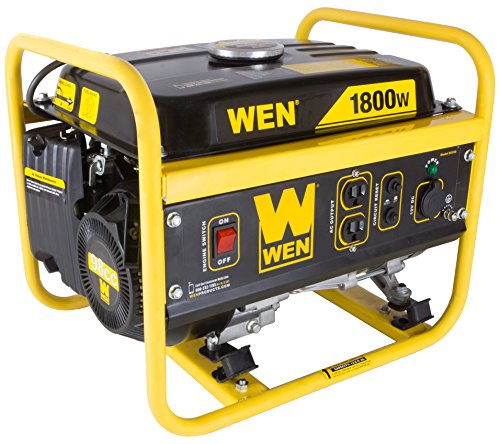 The WEN 56180 isn’t the biggest generator, but it can produce 1,800 watts of peak power. For recreational and emergency purposes, it delivers 1,500 watts of continuous power, and it features a compact, lightweight design.

With 1.45 gallons of gasoline, this generator can run at half load for about 7.5 hours, and it’s designed with two AC120V three-prong wall outlets.

For smaller devices, it also has a 12V DC outlet. The four-stroke OHV engine comes with built-in safety features, and it will automatically shut down if it detects low oil. The WEN 56180 also has a spark arrestor, which makes it suitable for most national forests and parks. 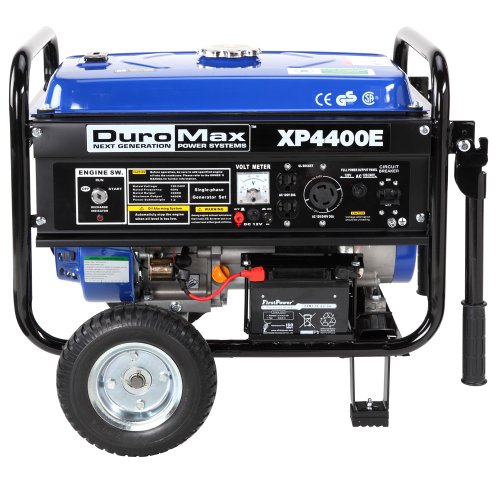 The DuroMax XP4400E is powered by gasoline, and the 7.0-horsepower engine can provide 3,500 watts of continuous power. To get most appliances started, it’s capable of 4,400 watts of surge power, and the gas tank holds up to four gallons.

On a full tank of gas, this portable generator can run for eight hours, and it features an electric key start. It’s also EPA approved, and if it detects low oil, it will turn itself off. 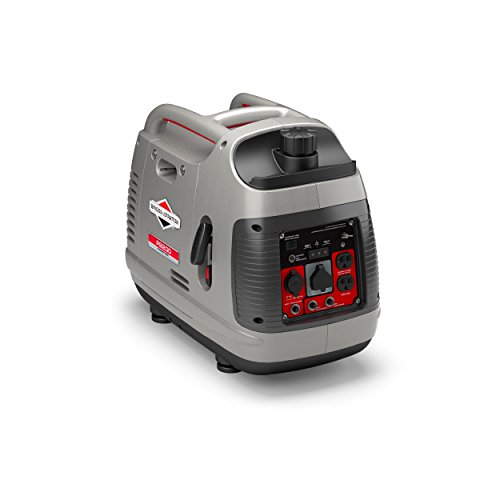 The Briggs & Stratton 30651 P2200 generates electricity with a 111cc OHV engine, and it can produce 2,200 watts of starting power. Once it’s running, it delivers a steady stream of 1,700 watts. Since it doesn’t create a lot of harmonic distortion, it’s perfectly safe for game systems, TVs and laptops.

The small fuel tank holds about one gallon, and on a full tank, this generator will run for eight hours. A built-in USB port allows you to charge portable electronics, and with a noise level of 59dB, the Briggs & Stratton 30651 P2200 is quieter than a normal conversation.

When compared to generators with a similar wattage, the Generac 5791 weighs about half as much, and to save fuel, it’s designed with FlexPower. This generator is quieter than many competing models, and the inverter design allows it to power sensitive electronics.

A built-in safety feature causes the Generac 5791 to shut down if it detects low oil, and a convenient LED indicator light displays the system’s status. This portable generator also has electronic circuit breakers, which protect against overloads. 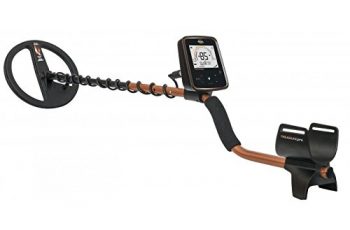 If you’re thinking about starting a new hobby as a … 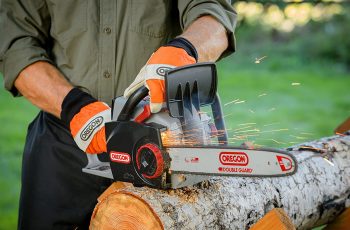 If you’re a landscaper, logger, or just someone who has …

A writer who loves technology and creating awesome buying guides to help people get the best products for their lives.