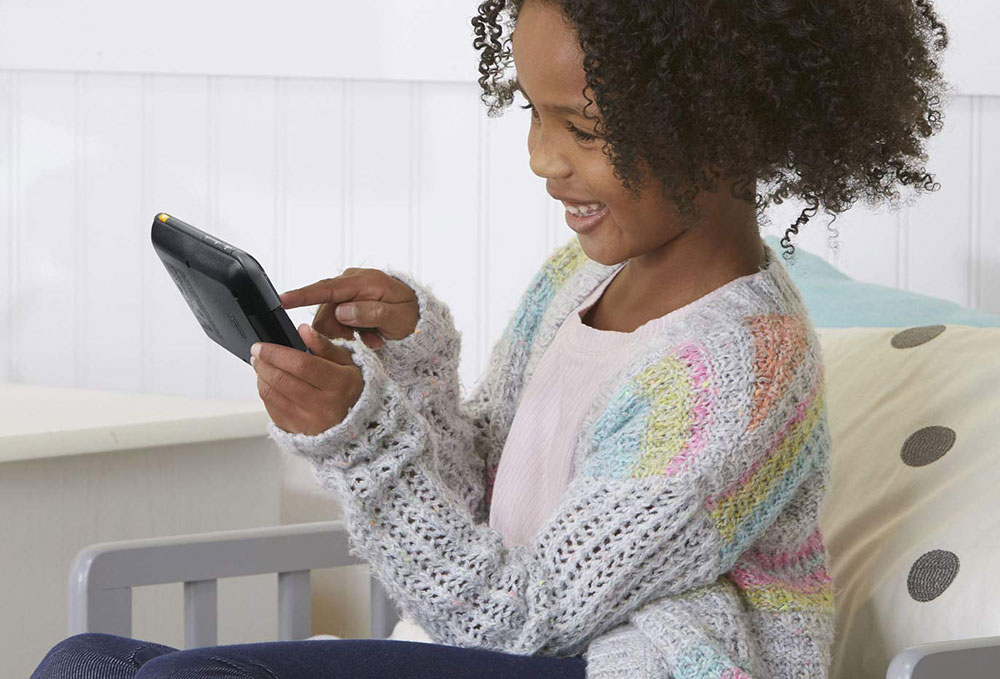 Cell phones have become a huge part of modern life. Even if you’re trying to stay relatively tech-free, you have to admit that there is a certain expectation that you’ll always be easily reachable if an emergency happens. While this might be something that adults have learned to cope with, it’s not quite so easy for kids. Kids face those same expectations, but adults also have to realize that kids may not be ready for the level of always-on connectivity that permeates the adult world.

The middle ground here comes from cell phones that are specifically targeted towards or have features that are appropriate for kids. These phones are not smartphones – those offer too much access and too many chances for things to go wrong. Instead, these phones offer simpler methods of communication and more limited functions. If you’re looking to get a first phone for your child, this type of phone can help you to stay in touch without requiring you to give them too much freedom all at once. 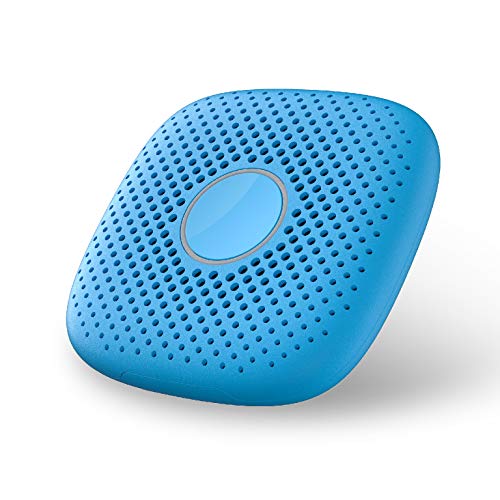 Less a phone than a phone alternative, the Relay is a good example of a device that’s simply meant for kids who need to be able to get ahold of their parents in an emergency. There’s no screen here, nor is there even an ability to dial multiple phone numbers – it’s more of a walkie-talkie that works over 4G networks and Wi-Fi than anything else. Kids can press the center button to get into live contact with their parents or to leave a message without parents having to worry about them calling anyone else.

The device also has a few other features that are reminiscent of smart speakers like the Google Home or Amazon Echo. Kids can use a handful of voice-activated apps and games, but they’re all pre-loaded on this device. It definitely maintains a very safe ecosystem for children and takes a lot of the worry out of handing over a phone from parents. This is solid phone for younger children to carry with them if their parents want a safe and easy way for them to stay in contact. 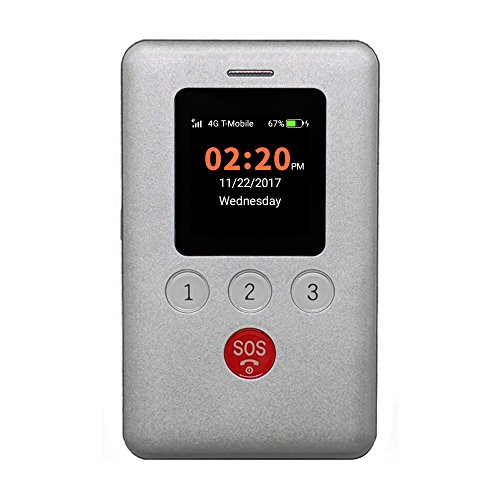 This is another device that really scales down the utility of a smartphone into something that’s a little more appropriate for younger children in an emergency. Instead of being full of apps and games, it’s another simple device that allows children to directly communicate with a limited series of approved numbers. There’s no screen here, no apps, and no ability for the child to really go outside of the pre-set bounds of the unit. It’s strictly an emergency device, albeit one that does its job very well.

It’s important to remember that this is as much a GPS tracker as anything else. It not only allows parents to keep an eye on where their children are at any given moment, but it also uses geofencing to alert parents if their children have gone outside of a prescribed area. While the unit doesn’t really do very much as a communication device, it can soothe the minds of parents who are worried about letting their kids go off on their own. Consider this one of you’re just looking for a good way to keep track of a child or to have an open line of communication for emergencies. 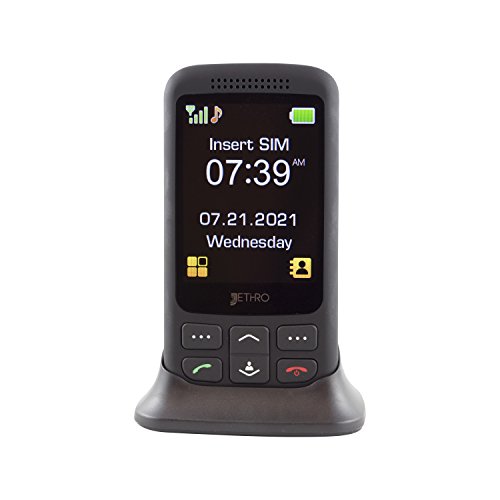 This phone is a bit of a throwback, but it’s actually ideal for kids. If you’re not quite ready to give your child a smartphone but you know that it’s still important for him or her to be able to get in contact with you and to stay up to date with friends, this phone can be an excellent compromise. While it may not have all of the features that you’d expect from a modern smartphone, it does allow children to make phone calls and text without having to worry about any restrictions from the phone itself.

Though the phone is fairly basic, it does do much of what parents need it to do. It makes calls and sends texts, just like a regular phone. Kids will love the fact that it also includes a camera, though there is no internet browser on the phone with which they can access social media. This is definitely just a phone, and that’s not a bad thing for those parents who want to ensure that their kids have a good method of communication without exposing them to the dangers that tend to come with an always-on internet connection. 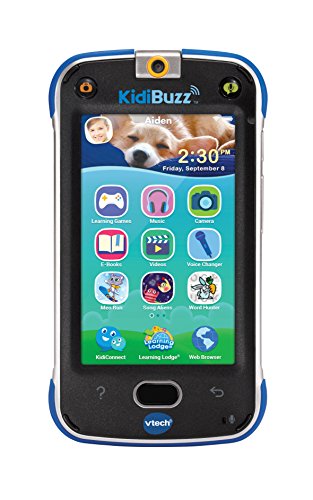 VTech is probably best known for its series of educational games and smart toys, but it does make a great communication tool for younger kids. This is explicitly not a phone – you can’t make direct calls on the device. You can, however, leave voice messages and send texts, which allows kids to get in contact with approved numbers and e-mail addresses when they are in emergency situations. In most other regards, though, this really is a kid-focused smartphone that provides fairly safe boundaries in which children can explore the internet without running into the more dangerous or objectionable content that’s out there.

Since it’s a VTech device, there’s also a fairly strong focus on education here. The phone is packed with educational games that help with math, spelling, and grammar. Kids can also go online, though only to approved websites. This phone is a really good fit for younger kids who might want to stay in contact with relatives who live far away or for kids who are just learning how to use the internet. Though not necessarily a pick for tweens or even younger teens, it’s still a very strong first step for most kids into a more technologically connected world. 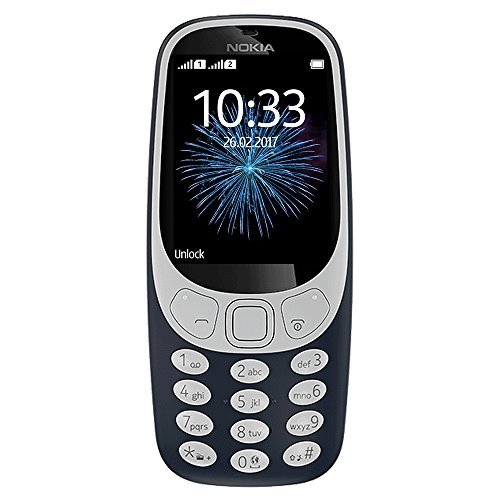 This phone from Nokia feels like those that were made in the pre-smartphone era. It’s a phone first and foremost, but still technologically advanced enough to have a few bells and whistles. If you’re the parent of a child who is begging for a phone because he or she wants to be able to go and do things without your direct supervision, this can be an excellent choice. It’s a real phone that requires a lot of responsibility, but it’s not so full of features that most kids will be able to get into a scary amount of trouble.

Despite the fact that this phone looks like a classic, it’s actually running on fairly new hardware under the hood. That means that the phone is responsive and that it uses modern networks, so your child isn’t going to be left totally out of contact. It even includes the classic game ‘Snake’, so your child can have a little fun while waiting to get picked up. This phone works really well for a child who needs a real phone but who might not be ready for the kind of responsibility that comes with having a more full-featured mobile phone. 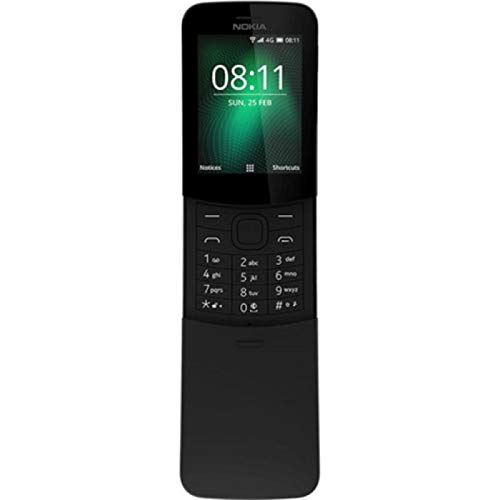 Unlike a lot of the cell phones that are geared towards kids, this one actually looks pretty cool. While that might not seem like the most important thing in the world to a parent, it’s pretty important to kids. It might not be quite enough to quiet those kids who want the latest and greatest smartphone, but it’s definitely something that will weigh in the phone’s favor. This is another simple, throw-back phone but it’s at least one that has a lot of style going for it. It’s definitely not a phone that most kids are going to be embarrassed to use.

This phone does definitely score some points by not necessarily being a phone that’s made for kids. Instead, it’s just a phone that’s made for basic communication. Your child can make calls and text from the phone, but that’s about it – no apps, no real internet access. It’s the kind of phone your child can use to call friends or to get a ride home, but not much else. It’s a great choice for any child that is getting to the point at which he or she is out on his or her own, but not at which he or she is ready for a more expensive phone. 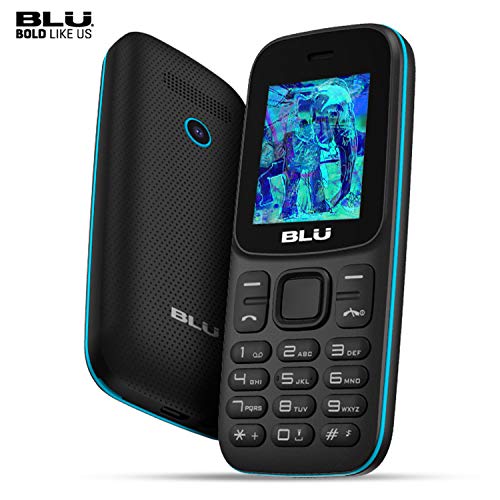 This little phone is another one that feels like a throwback to the pre-smartphone days, both in terms of construction and in terms of what it does. On the positive side, this phone really does seem like it’s indestructible – it’s tough enough to stand up to regular use from even a rambunctious child and it does a great job of staying charged for far longer than any smartphone. The phone is limited, though, but that does feel like a very purposeful choice. This is really a throwback to the days in which phones were actually meant to make phone calls.

There are a few other cool features hidden in the phone, though, and they’re good for kids. There’s a built-in FM antenna, so the owner can actually listen to the radio. The phone can also play mp4s, so it works well as a portable music player. There’s even an included flashlight which might not sound like a very big deal, but it’s one of those functional pieces that makes the phone feel like it’s less meant for very young kids. This is another good phone for those who are transitioning into the stages of life in which they’re expected to be a bit more responsible. 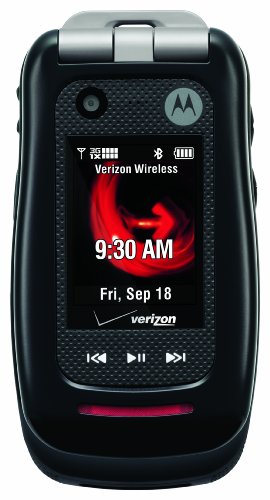 Of all the flip-phones on the market right now, this one seems like it’s really the best for kids. If you are looking simply at its capabilities, it does everything a kid might need it to do – it makes phone calls, sends texts, allows for minor media playing, and even has some limited internet connectivity. It doesn’t run apps, though, so there’s no threat of improper social media use from this phone. It’s fun to use and to play with, but it’s still a fairly safe device.

The phone is also incredibly rugged. If you remember the days of these cell phones being standard, you remember that they’re a lot harder to break than their modern counterparts. This one steps up the safety game a bit with an even more durable construction, making it perfect for kids who play hard or who are prone to dropping items on the ground. Though it may not allow your child to play games or get on some websites, it’s nonetheless a really cool phone that is also very useful for helping him or her stay in contact with you.