For fishing enthusiasts, sometimes just being out on the water is enough to make a perfect day. Sometimes, however, you really want to find the fish.

Most people seem to agree that Garmin makes the best fishfinders on the market. These handy tools use sonar to show you what’s under your boat in real time. A Garmin fishfinder takes the guess work out of fishing by helping you find the hot spots so you can catch more fish.

However, Garmin makes so many different models of fishfinders that the choices can feel overwhelming, especially if you don’t know what you’re looking for.

Here are a few features to consider when looking at Garmin Fishfinders:

Garmin fish finders come with traditional sonar or CHIRP multi-frequency sonar, Garmin DownVu to show depth, SideVu to show the area around your boat, or a combination of sonar tools.

Screens vary from 3.5″ to 9″ in diameter. All the Garmin fish finders reviewed below have color screens. Higher-end models provide higher resolution or split-screen options for clearer images.

All the Garmin fish finders we review include GPS. You can also use the GPS to mark hot spots or docks to easily find your way back. However, only the EchoMap models come with pre-loaded G2 charts and/or Garmin LakeVu maps.

With those basics in mind, let’s dive deeper with reviews of nine of the Best Garmin Fishfinders: 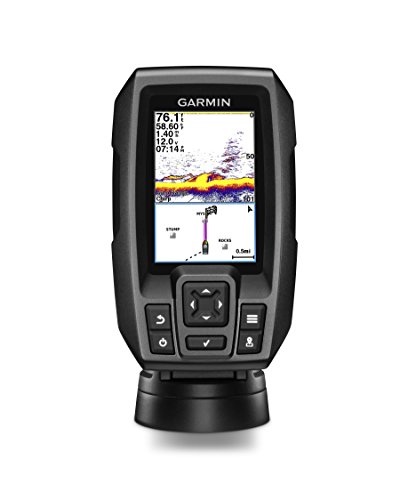 The big brother of the Striker 4, the Striker 4cv features multi-frequency sonar and a deeper range, up to 1750 feet in freshwater and 830 feet in saltwater. The Striker 4cv still includes all the features that make the Striker 4 great: a color screen, GPS, and features to save hot spots and docks.
The biggest difference between the Striker 4 and Striker 4cv is the inclusion of CHIRP ClearVu (455/800 kHz) sonar. Garmin devotees say that ClearVu makes a huge difference in finding fish. The images generated are so sharp you can see the outline of logs and vegetation which would appear as red blobs on other fish finders.
The one complaint from some customers is that the 3.5″ screen isn’t large enough to see clearly while operating your boat. If this might be a problem, you can also get the Striker 4cv with a 5” or 7” screen.

This base model Garmin fish finder is anything but basic. It features a clear color screen, CHIRP multi-frequency sonar, and the ability to save hot spots and slip locations. The Striker 4 will help you find fish as deep as 1600 feet in freshwater and 750 feet in saltwater.
Fishing enthusiasts love this model for the clear screen, GPS, and overall ease of use. If you’ve never had a fish finder, this one comes with everything you need for installation. However, some customers recommend replacing the “flimsy” mounting clips and buying an additional charging pack.

As a final note, the transducer lead for the Garmin 4 will work for boats under 18 feet. If your boat is longer than 18 feet, you may want to consider purchasing a longer lead or opting for another Garmin model or transducer. 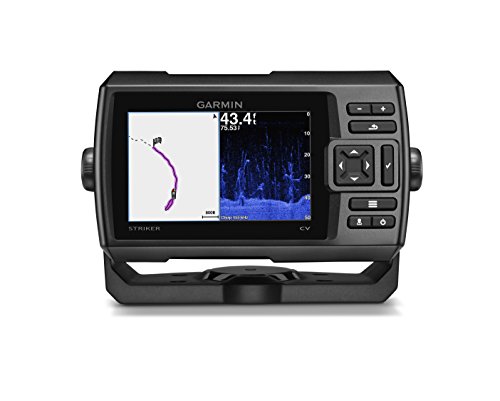 If you want the features of the Striker 4cv but prefer a simpler set-up, then consider the easy-to-use Striker 5cv. Like Garmin’s touch-screen models, the Striker 5cv has a color screen, CHIRP sonar, and included transducer.
The Striker 5cv is different from the Striker 4 models because it is controlled with a keypad instead of a touchscreen. This simple interface is more intuitive, but don’t let the ease-of-use fool you. The 5cv is a high-tech piece of sonar equipment that will allow you to use GPS and save locations in addition to finding fish.
The Striker 5cv also presents your sonar data in the traditional flasher format. This feature makes it better for ice fishing and vertical jigging than the Garmin 4 series models. 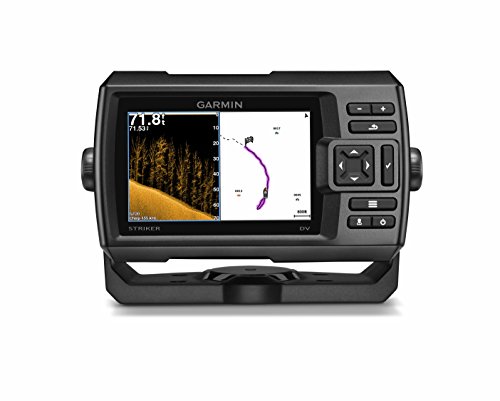 Serious fishermen who take on serious weather should consider the Garmin Striker 5dv. Like the Striker 5cv, the Striker 5dv features an easy-to-use keypad, color screen, and CHIRP multi-frequency sonar. However, the 5dv has a tougher, more rugged design and some additional high-end features.
The Striker 5dv also differs from the 5cv model because of the inclusion of ultra-sensitive GPS and more detailed sonar flasher to help you gauge the depth of your jig and the fish swimming by it. The flasher will also tell you if the bottom is solid or muddy.
Finally, the Striker 5dv provides clear images up to 2,300 feet deep in freshwater and 1,100 feet in saltwater. This capacity makes the 5dv similar to the pricier Garmin 7 series models. Customers love the Striker 4dv’s clear screen, accurate GPS, and overall durability.

The Garmin Striker 7dv differs from the similar Striker 5-series models for two simple reasons: a clearer image on a 7-inch screen and more precise sonar. The Striker 7dv includes fast-updating multi-frequency CHIRP sonar that gives you photograph-like images that provide clearer fish arches and target separation.
The Striker 7dv also includes CHIRP DownVu, a must-have for ice fishing or jigging. Like the Striker 5dv, the 7dv is built to withstand harsh environments.
As a final note on the Striker 7-series, the 7dv is neck-and-neck with the 7sv according to customer reviews. The Striker 7dv is generally considered more durable. However, if you want Garmin’s SideVu to give you a larger view around your boat, consider the Striker 7sv instead.

The Garmin Echo 301dv lets you see what’s under and around your boat with great accuracy and control. This compact unit delivers dual images from the 77/200 kHz sonar and Garmin DownVu transducer simultaneously on a color screen.

The Echo 301dv also features adjustable narrow-to-wide viewing cone angles. This allows you to control your sonar image and see more of what’s below the surface.This Garmin fish finder is easy to install and small enough that it even works on kayaks. Prospective buyers should note that the screen was a little too small for some people to use while navigating the boat.

A few customers also noted that the alarm on the Echo 301dv is rather quiet and can’t be turned up. If you like to blast music while you fish, you may have a hard time hearing the alarm. 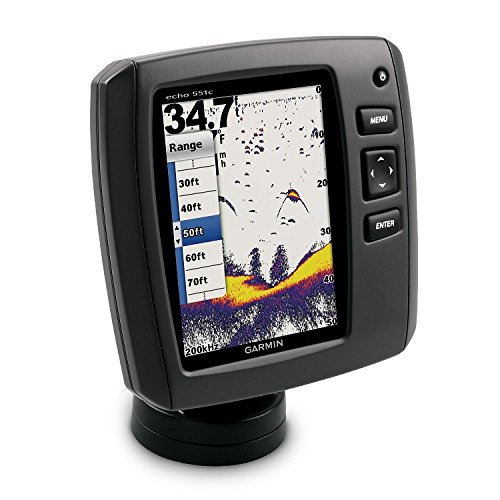 The Echo 551dv Worldwide is similar to the 301dv but features a higher resolution screen, Smooth Scaling that transitions clearly from shallow to deep water, and even sonar rewind if you need to take another look.

The 5-inch vertical VGA screen provides stunning resolution that allows you to see fish arches and bottom features clearly. The CHIRP and Garmin DownVu sonars are effective up to 2,300 feet deep in freshwater or 1,100 feet in saltwater.Customers love the Echo 551dv from its top-of-the-line screen to its ease of installation. This model comes with a swiveling, quick-release mount. The only issue seems to be the inconsistent length of the transducer lead; some customers got a 20’ line while others only report getting only a 15’ line which won’t work on longer boats. 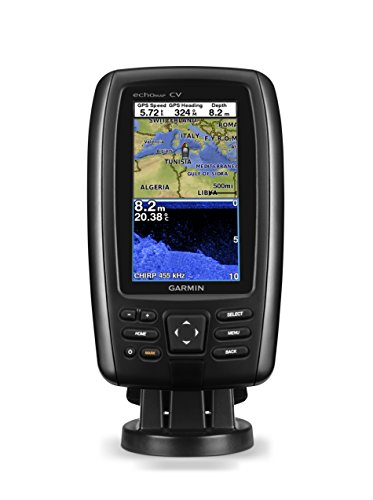 The Echomap CHIRP 42Cv differs from the 301dv with two important features. First, the Echomap 42Cv uses multi-frequency CHIRP sonar to provide sharp, fast-updating images. Second, this model includes maps to help you pinpoint your location and navigate to favorite spots around the world. You can also draw navigation lines to create your own routes on top of existing maps.If you want a lot of tech with a lot of options for customizing, the Echomap CHIRP 42Cv may be the right Garmin fish finder for you. This model will also appeal to people who know they want Garmin’s maps and don’t want to go through the hassle of upgrading later. 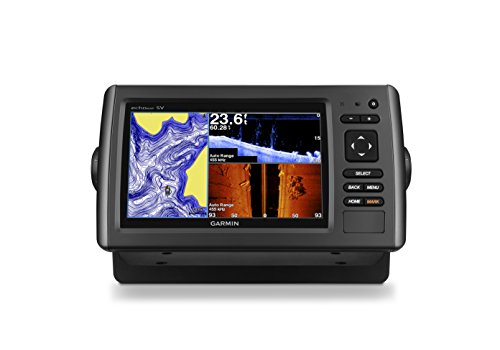 If you truly want it all—unparalleled sonar tools, world maps, and tech-savvy features—take a look at the Garmin EchoMap CHIRP 73SV. The EchoMap 73SV comes with all of Garmin’s best sonar options: powerful multi-frequency CHIRP, Garmin DownVu, and SideVu. While most Garmin fish finders only come with one or two types of sonar, the EchoMap 73SV gives you the clearest view with all three.
The backlit, auto-adjusting display on the 73SV comes in 4-, 5-, 7-, or 9-inch widescreen sizes. This model also comes with a choice of U.S. G2 charts, U.S. LakeVu, or Canada LakeVu maps. The best-in-class 5Hz GPS updates every 5 seconds to give you the most precise read on your location.With the EchoMap CHIRP 73SV, Garmin has won over lots of happy customers. This fish finder is easy to install and use, is durable, and can help you see familiar waterways like never before. Though a few owners wished the 73SV had an anti-glare screen, most had no complaints about this top-notch Garmin model.
(Visited 2,341 times, 1 visits today)